Zombie of the Week: The Zombie!

Posted by kiwidust on August 17, 2014
Posted in: Zombie of the Week. Leave a Comment 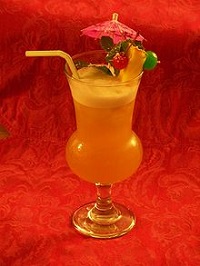 In the late 1930’s restaurateur Donn Beach apparently decided that his customers were just too damn sober. So he pieced to together a cool, fruit-laden cocktail then injected it with enough Rum to kill a Republican. The rumor is that he created it to help a customer with a hangover, who then returned complaining that it had “turned him into a zombie.” That seems dubious, but The Zombie, has been a popular cocktail ever since.

Although Beach jealously guarded his recipes, it’s difficult to keep something like this completely secret when you have a chain of restaurants and a small herd of bartenders. According to the book, “Sippin’ Safari”, the original recipe included lime juice, falernum, Angostura bitters, Pernod, grenadine and three different kinds of rum. It’s also included something called “Don’s Mix,” which is rumored to be cinnamon syrup and grapefruit juice. I’d rather not have confirmation.

Comedian Billy Connolly, who zombie fans may remember played the titular zombie in 2012’s amazing “Fido“, once suggested that his audience try The Zombie. Apparently you “get drunk from the bottom up”:

Not being much of a drinker myself, I can’t say if he’s correct. If nothing else, it does seem a better way to go than getting eating alive by the animate dead.