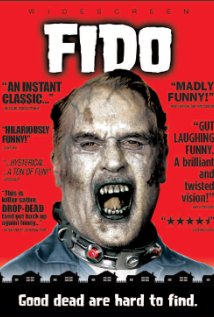 Although delayed a day due to family visits this marks the first selection in our annual “Boiled Eggs and Brain Eaters” Easter zombie movie marathon.  We decided to start with something on more family friendly side of the genre.

Radioactive dust from space reanimates the dead causing a world-wide “Zombie War”.  After beating back the zombies into the unprotected “wild zones” 1950’s Americans enjoy an idyllic existence safe behind fences maintained by “ZomCon” a mega-conglomerate.  Zombies, via ZomCon collars that eliminate their blood-lust, become menial laborers and servants.

Timmy Robinson is an awkward boy suffering the unwanted attentions of bullies and wanting the attention of a neglectful father obsessed with death.  His mother engages a zombie servant in an effort to impress the new neighbors and he quickly befriends “Fido”.

The movie has a wonderful look highlighted by an over-saturated technicolor cast and panoramic widescreen that recalls classics from the golden age of color film.  The sets, props and costumes are all authentic-looking and draw you into the fiction they’ve created.   The period musical selections are effective but sometimes slightly overbearing.

Billy Connolly gives a sublime, wordless performance in the titular role.  You’ll laugh more at his meaningful glances and eye-rolls more than most anything else.  Carrie-Anne Moss is excellent (and will make you wonder why you’re not seeing more of her) and K’Sun Ray as Timmy is perfectly cast.  All the other featured performers are veteran actors (mostly from prime-time TV) and nobody can be called out in the negative.

The movie is rife with subtle (and not-so-subtle) commentary on American consumerism, social mores and morality.  Call-outs to classic tropes are plentiful and often hilarious (as when Fido must run home to tell Timmy’s mother that he’s in trouble).  The movie is thoughtful, fun and one of the most original takes on the genre.  I’m not sure how it slipped under our radar for six years but it’s a must-watch for any and all zombie fans!