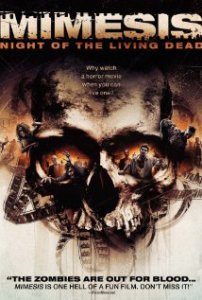 You’d think that a zombie movie with no zombies wouldn’t be very good. I mean, that’s the whole point, right: zombies? You’d be wrong. It’s a bumpy road, but this is definitely a rarity: a clever, smart low-budget horror movie. They should have changed the name tho’: needing to bring a scene to a screeching halt just to have somebody explain the meaning of your title is a big, bloody red flag. Even if the name fits, if nobody other than literature majors knows what it means: change it.

Of course, in this case, it doesn’t fit. Although “Mimesis” has grown to have many meanings in the past couple of thousand years, it most often refers to “art imitating life”. The opposite, “life imitating art” is anti-mimesis. This movie is about the latter, but they call it the former. So not only is the name pretentious, it’s wrong. But the movie’s still good.

A diverse group of horror fans is approached at a convention and invited to an exclusive party at a remote farmhouse. As the party winds down, they’re drugged and wake up in the morning dressed in vintage clothes and unable to remember how they got there. Two are lying in a cemetery, five are locked in the basement of the farmhouse and one is passed out in a pickup truck. The two in the cemetery are attacked by what looks like a zombie and one of them has his throat ripped out.

When they take shelter in the farm house and finally meet, it becomes clear that somebody is trying very hard to recreate George Romero’s classic, “Night of the Living Dead”. Each person is accounted for: Barbara, the middle aged husband and wife with their little girl, the teenage lovers and, of course, the black guy. If that wasn’t enough for horror fans to piece things together, they also find the movie playing on a loop in one of the rooms.

Most of the actual action is fairly standard slasher fair. Dark rooms, shaky hands, improvised weapons and lots of gore. Setting it all against the backdrop of an insane recreation of a horror movie makes it seem fresher and more inventive than it likely deserves to be, but what can I say? It works. The gore is well done using classic, tried and true practical effects and reminds you of how far digital effects still have to come. If you need to stab somebody in the face with a pitchfork, practical effects are absolutely the way to do it right.

As you might expect, things do start to break down at the end, but not so much that the premise wears out its welcome. My only real complaint is that the movie had two more endings that it should have had – the final sequence lacks all of the finesse and focus of the main film. It’s not enough to ruin things, but it does leave a bad taste in your mouth.

There are more nits to be picked, of course . You may complain that the clever premise is hiding a mediocre movie, but isn’t that a success rather than a failure? At this budget level you can’t win on visual effects, or acting or even writing. You can win, and sometimes even win big enough to overshadow all your other problems, with a clever premise and a focused execution. Horror is 99% mental: you can make an easy movie with bare boobs and buckets of blood, but unless you give the brain something to chew on, you’re going to fail. This movie provides your ravenous brain with something nice and bloody to sink its teeth into.