Posted by kiwidust on December 3, 2014
Posted in: Televison. Leave a Comment 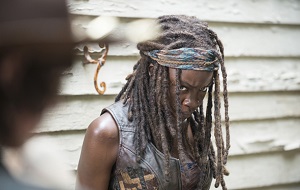 Here are a few random thoughts on The Walking Dead episode 508, “Coda“.

You killed Beth, you Bastards! Of course you pulled all the right strings and killed her moments before she was reunited with the group. It was absolutely heart-wrenching. Tears were shed. Isn’t it too bad that it was just kind of silly?

Before digging in, understand that I’ve had trouble with Beth, as a character, from the start. She always felt like something of an “extra” person; a blank slate to apply whatever characteristics needed at the time. She went from overly sentimental and blindly hopeful to overly callous and pessimistic, then back again, in a roller coaster that all seemed more schizophrenic than evolutionary. Before she cribbed those scissors (and it was obvious that she was going to die) I was really hoping that this whole experience would be a new start for the character; give her a firmer foundation.

Still, there was just no reason for this and the lengths the show had to go to set up the opportunity, as usual, made our heroes look like idiots. Here’s are just a few things:

Heart-wrenching as it was to see Daryl and Maggie’s responses to Beth’s death, the entire circumstances of her death were a complete disservice to her and our heroes.