Posted by kiwidust on December 8, 2014
Posted in: Zombie of the Week. Leave a Comment 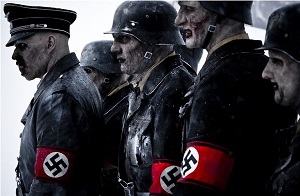 For some reason Nazis and Zombies go together incredibly well; like peanut butter and bananas, macaroni and cheese or toddlers and snot. It just seems so right, almost proper, for a rotting, shambling, carnivorous corpse to also be flashing a swastika, doesn’t it?

So, for the entire month of December (and possibly longer) we’ll be celebrating our favorite Nazi Zombies. Because isn’t the true meaning of Christmas making things easy on yourself and half-assing things?

First up are those wacky, mixed-up goof-balls from 2009’s often overlooked Norwegian masterpiece, “Dead Snow“. These crazy guys stole a bunch of gold while committing terrible atrocities and are now cursed to a half-life of pain and suffering whenever their treasure is disturbed.

This movie was a pick for the very first “Boiled Eggs and Brain Eaters” Easter marathons and our favorite movie that year. It’s clever and funny, the effects are great and gory and the story is crisp and fresh. For some reason gore splattered across bright, white snow is much more effective than barely seeing it in a cramped, dark close-up.

Have any zombie Nazis or Nazi zombies to bring to our attention? Let us know!