Posted by kiwidust on December 19, 2014
Posted in: Movies. Leave a Comment 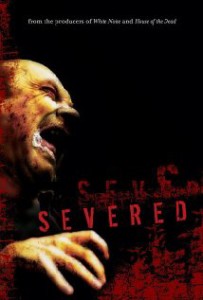 This wavered wildly between inspired and insipid letting it land squarely in the mediocre middle. It seems to have fallen victim to a common problem in this space: barely enough money to make a movie, but enough ideas for three.

The setting is a remote logging camp and mill, run by a giant, profit-hungry corporation. The infection is the result of this company playing around with the equivalent of tree steroids. The injections make the trees grow significantly faster, but apparently also cause minor, prolonged cases of zombism in the loggers and environmental activists that populate this little corner of the Pacific-Northwest.

This leads us to our first minor issue: there seem to be a lot of zombies running around here. We only ever see a handful of people at first, but later seem to have a endless supply of zombies. The infection’s actual path of transmission is vague at best, but it’s made clear that the area is remote and unpopulated; so where are all these people coming from? Why are they spread out all over the place?

The zombies themselves are confusing as well. They appear to be hyper-aggressive, infected a la “28 Days Later”, yet we’re told “you have to hit them in the head,” for some reason. Granted, this is said only once and never seems to matter again, but it is said. The infection is, of course, transmittable via bite and this has the same problem as many other zombie properties: if the zombies eat and dismember their prey, how does the infection spread so well? With the lack of warm bodies here, this seems to be a much more important question.

The major issue comes into play about halfway in, when our group makes it way to another camp. Up until this point we were enjoying a decent, but fairly standard, “small group tries to stay alive” story. They ran from zombies, struck back with crowbars and sticks and tried to find a way to escape or call for help. But this new group – and we have to remember that this outbreak is, it seems, not more than a few days old – seems to have already gone full “Lord of the Flies”.

We switch gears completely with only a portion of our run time left. The new camp is controlled by a sadistic leader who rules with an iron fist. They exploit the infected for a dangerous bloodsport. They live in the warped shadow of a civilization that they’ve forgotten. I mean, it’s been, like, over a week since the outbreak started – what else do you expect them to do?! You get the sense that these guys have given up civilization a lot. That one time the the toilet got plugged up or when “Friends” was cancelled, for example.

This segment is interesting, but confusing, incongruous and curtailed. It’s a shame because, had this aspect been introduced sooner and some minor timeline changes made, this could have been a solid exploration of human fragility in the face of disaster. Instead it flits, fickle, from theme to theme never settling on one long enough for the audience to sink in their teeth.