Posted by kiwidust on December 22, 2014
Posted in: Zombie of the Week. Leave a Comment 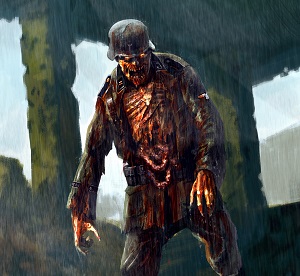 As we continue with our holiday theme of Nazi Zombies (because, why not?) we stay in the world of video games because there are apparently a lot of Nazi Zombies that need to be taken care of in here.

One of the purest example of this is the “Sniper Elite: Nazi Zombie Army” franchise, a popular offshoot of the “Sniper Elite” series. This game see a desperate – or maybe just bored – Hitler releasing a horde of undead soldiers on the world. You must use your super-sniper-skills to… shoot them from far away.

It really is more exciting than it sounds. If you’d like to blow the heads of nazi zombies yourself, you can get both games for $12.50 on Steam for the holidays.