Zombie of the Week: Bart the Zombie Cat

Posted by kiwidust on February 23, 2015
Posted in: Zombie of the Week. Leave a Comment 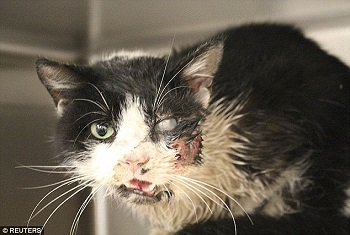 In a story that seems to get weirder the longer it goes on, we bring you Bart, the Zombie Cat. The Tampa Humane Society details his story thus far in “Miracle Cat Comes Back from the Grave“. Bart was apparently hit by a car in January. The owner believed the cat to be dead and buried him. Presumably after being hit with a nice dose of Trioxin, or maybe the T-Virus, the cat clawed its way out of the shallow grave and showed up back home five days later.

Amazingly the cat suffered no internal injuries. He needed extensive surgery to have his left eye removed and his jar wired shut, but he’s expected to recover, lead a full life and will probably get to wear a cool-ass eye-patch. This would make him both a pirate and a zombie.

This may be the coolest cat that’s ever existed.

All is not well in the world of undead cats, however. Apparently, as reported on CNN,  Bart is now the target of a lawsuit by his owner who claims that the humane society is refusing to return him so that they they can use him to raise donations. We refuse to take a position on the matter, but have admit that, yeah: a zombie pirate cat is clearly a cash cow.