Random Thoughts on The Walking Dead, “Them” and “The Distance”

Posted by kiwidust on February 24, 2015
Posted in: Televison. Leave a Comment 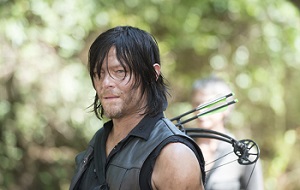 We spent last week in Las Vegas on a partial pleasure/business trip so we ended up watching two episodes in a row. Here are a few random thoughts on The Walking Dead episode 510, “Them” and episode 511, “The Distance“.

I’ve harped long and hard on the lack of the preparedness our group displays. It’s incredibly difficult not to continue down that path at length, but today I’m just going to mention one thing:

Babies poop! Babies poop a lot! Yet we never see any diapers.They also squirm and wriggle and are a complete pain in the ass to carry around. I know, I’ve raised two of them. Find a stroller or a wagon or a Baby Bjorn.

The long, hard road was a great sequence. Watching the desperate group plod along towards a meager hope is heart-wrenching. Watching them do it without carrying supplies or preparing for it makes me think, “maybe they deserve it” just a little tiny bit.

It reminds me of “The Road“, a excellent post-apocalyptic drama following a desperate man trying to keep his son alive by walking to a warmer climate. The two trudge on through cracked asphalt and ash pushing a beaten shopping cart full of their scavenged supplies and belongings. It’s makes the audience incredibly empathetic watching them try to be as prepared as they can, struggling to maintain the barest needs for survival. Our group is incredibly difficult to empathize with exactly because they seem to ignoring the basics of protection and survival.

Looks Great, but Where are They?

The group always seems to be out in the middle of nowhere lately. Small, dusty single-lane roads with no buildings or cars in sight. In theory, I’m sure, this is to escape zombies, but there are still plenty of those… so why not stick closer to where supplies and possible transport are?

It brings up an obvious paradox: if we’re saying that most of the supplies have been scrounged through and used already, then wouldn’t there be a lot more people around that have survived by using them? If, on the other hand (as it appears) we’re saying that the vast majority of people are already zombified and there are only a small number of the living left then wouldn’t supplies – at least non-perishable ones – be relatively common an easy to come by?

It seems items like gas, clothing, camping gear, etc. should be easy to come by. Hell, we don’t even go camping but we still have a decent amount of gear in the garage; including five gallons of gas for the lawn mower. I would think that this would be the same for any suburban neighborhood. Granted there’s a balance to be had between spending all your time scavenging and moving forward, but when you have nothing, scavenging seems like the better option.

It’s stunning how many popular movies and TV shows fail these tests utterly. The Walking Dead, on the other hand, handily passes multiple tests in almost every episode. Seeing Maggie and Sasha discuss their mortality or Aaron and Eric’s reunion doesn’t feel forced or contrived, but it does subtly alter our expectations of what we should expect from other shows.

Rick’s story about his grandfather in World War II was touching and honest and I hope is a mark of his opening up more. Rick is still a great character but has been too erratic and closed lately, we need to see into him more to regain some of the trust and stolidness that he’s lost. Along those lines it was also great to see Rick being pressured, and ultimately falling to that pressure, by the other group members. This, hopefully, marks the end of the “Ricktatorship” that has turned a lot of fans against him.

Finally Aaron and his offer – and Rick’s response – bring up the interesting question: how would you recruit in this world? Could Aaron have done anything better? I did like to see the return of the groups “Three Question Test”. As silly as it may seem there’s a tremendous depth to it that I’d love to see expanded upon. Another obvious high-point was Rick’s obsession with hearing the community before agreeing to be brought into it. It was a great idea, even if it didn’t make any sense. Remember that neither Terminus or, especially, Woodbury, were particularly quiet when first introduced.