Random Thoughts on The Walking Dead, “Forget” and “Spend” 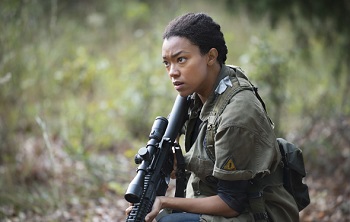 Here are a few random thoughts on The Walking Dead episode 513, “Forget” and episode 514, “Spend“.

Why is Alexandria Still a Thing?

I’m predicting that we’ll be seeing some version of an answer to this, but I’m not seeing how it could be satisfying. Alexandria has power, it has hot water, it has resources… and it has apparently no enemies at all. They don’t even seem to lock their gates or, as we saw, post a watch. Even if (hint!) a group of terrible people are extorting them for protection, we haven’t seen them yet so they can’t be sticking that close.

Remember Joe’s group, the barely contained gang rapists that Daryl hung out with for a little while? What would Joe’s group have done with Alexandria? No guards coupled with an easily scaled wall and a population isolated in small groups across a large area seems to scream “night raid”. They know that people like this are out there – which is exactly why Aaron goes out to interview them – but wouldn’t groups just happen to find the place? Perhaps not a lot, but enough to spark a basic interest in active defense?

They don’t even guard themselves from themselves as is evidenced by the ease by which Carol robbed them. In the end, the hardest part of the heist was coming up with a story that would make a pre-teen crap his pants.

These past few episodes have all been about setting various plot points to simmer. Just to name a few, we have:

A lot of people seem to hate it when the show slows down and goes a little soap opera, but I quite like it. New relationships means new pressure points for the dramatic turns and greater opportunity for emotional breadth.

The show continues its buzzsaw-like felling of the cast with the exit of both Aiden and Noah. Aiden was something of a minor surprise but not totally unexpected: the death of a son would create significant tension between Deanna and the newcomers and this is exactly the kind of tension that this show adores. Noah, on the other hand, was a surprise.

Despite the length of his run, the character remained barely defined; a blank slate. It was only in this episode, when he asked to be taught how to build and shared his thoughts about the future, that he gained any measure of depth at all. Up until then he was just a placeholder used when needed to ferry points around. His death was impressive, but why does this show hate character growth so much?

It also leads me to a sad prediction: Glen’s dead the moment Maggie gets pregnant.

Next week we’ll get to see if Tara survives (she will, since they didn’t just kill her off) and how the still gelling communities takes the loss of two prominent members. We’ll also get to see if Carol gets ever creepier and if Rick rationalizes his way to murder or not.

One comment on “Random Thoughts on The Walking Dead, “Forget” and “Spend””