Posted by kiwidust on November 15, 2015
Posted in: Televison. Leave a Comment 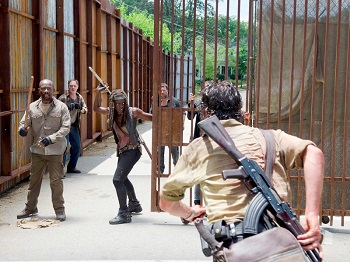 Here are some random thoughts on The Walking Dead episode 605, “Now“. Alexandria has had a devastating wake-up call and now is starting a crash course in armageddon 101.

Way back in March, after we watched Noah get turned inside out, I said this:

It also leads me to a sad prediction: Glenn’s dead the moment Maggie gets pregnant.

Obviously there still is a chance that the show is trolling us and Glenn isn’t dead, but that’s a big “if”. If true, it’s also kind of shitty, isn’t it? I’ll live with it, but still… shitty. I haven’t discussed Glenn’s death in any detail, yet, so I’ll try and clarify my issues with it.

A core element of this show is that nobody is safe. We’ve seen that, again and again, fan favorite characters can die, suddenly and without meaning. While this does make for an edge-of-your-seat experience, it has risks as well. Firstly, and most obviously, fans may simply tire of watching favorites die – especially when their deaths are due to silly mistakes or inscrutable decisions, as has been the case lately. Audiences can – and will – tire of “their” characters making silly decisions.

There’s a still more subtle, insidious issue at play: people love this show because of its soul. That’s why it’s attracted such a following. Not the zombies, not the setting and not even the villains; although all of those play large parts. It’s the soul of the show that’s made it Number One. That soul rests squarely on the shoulders of its characters. An enormous part of that soul resided in Glenn; as it also does in Maggie, Daryl and Carol and a few others. Now he’s gone. The death of one of these characters doesn’t just upset the fans, it diminishes the show for them.

I left Rick off the list on purpose. Rick, as the de facto star of the show and definite focus of the comic, may be the only “safe” character. The show has abused Rick so greatly that he’s simply too tainted, at this point, to represent the soul of the show. He also fails as the moral focus of the group (a role that seemingly marks you immediately for death in any case). Consider a simple question: if the entire apocalypse were people with Glenn-minded folk, it wouldn’t be such a bad world… if it were all Rick’s it would be horrific. Rick could, eventually, regain those roles, but it will take a major shift in the character.

Any show can survive the deaths of major characters, but certain characters mean more to the fans. If this show forgets that, and mistakenly thinks that shock is more valuable than soul, it will eventually rot from the inside like any of the walkers its created. To put it more simply: are we going to look back a year or two from now and say that The Walking Dead jumped the shark when Glenn died?