Zombie of the Week: Gloria the Junkie

Posted by kiwidust on August 24, 2015
Posted in: Zombie of the Week. Leave a Comment 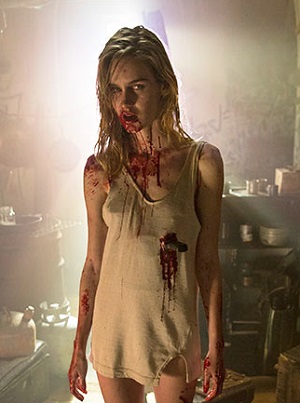 Of course we’re celebrating the series premier of “Fear the Walking Dead” this week! Not just because we’re desperate for new ideas, but also because this is a legitimate zombie event! That kind of thing, you see, is right up our alley. You might even see more examples from the show in the coming weeks.

It may be predictable, but we’ve decided to use the first zombie we see in the show: Gloria the Junkie. Upon awaking from a deep heroin  trip, Nick shambles through the abandoned church that he and his friends have been crashing in. He’s looking for his friend Gloria, but instead he finds blood and gore. Worriedly he continues his search only to find “90 pounds soaking wet” Gloria intently feasting on her pile of victims.

Gloria may not have been quite as impactful as The Walking Dead’s first zombie, the infamous Bunny Slipper Girl, but was effective enough to get things moving in style.

This is the 125th Zombie of the Week; that’s over two years of zombies! We are desperately running out of ideas! Please contact us with suggestions!