Posted by kiwidust on October 15, 2015
Posted in: Televison. Leave a Comment 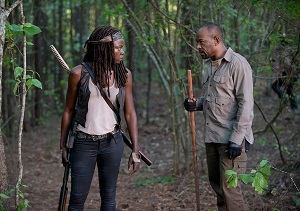 Here are  three random thoughts on The Walking Dead episode 601, “First Time Again“. This was one of the most impressive, if slightly frustrating, season premiers of any show.

I’m glad Rick is calming down… he was undisputed mayor of Douchesylvania for most of last season. I like the evolution of Morgan’s character (and Lennie James is the perfect actor to play him) and love how he and Rick, together, form the perfect leader for Alexandria. Strong and able to make the tough decisions, yet restrained and able to demonstrate mercy when needed. The sooner Rick sees that this is a good thing, the better.

The interaction between Morgan and Carol was priceless. Carol’s Donna Reed routine is getting a little old (and it still seems odd that nobody from the group has let it slip how badass she actually is) and having Morgan see right through it was refreshing. I also really enjoyed Daryl’s quiet persistence with Rick. That he’s willing, however meekly, to argue his convictions with Rick shows just how far their relationship has come.

Confused by the Alexandrians!

I’m disappointed that we’ve not seen a real surge by the Alexandrians. The secondary characters are interesting, but flat and lifeless right now. Deanna, still in shock, has become something of a prop. This is reasonable, at least in the short term, but should end soon. I like that Nicholas is now Glen bitch more for what it says about Glenn than for the depth it gives Nicholas. As a comic reader I loved seeing Heath for the first time, but was disappointed that he really didn’t do anything but follow the lead of the established characters. Jessie is understandably stand-offish to Rick, yet lacks any real for existence beyond him at the moment.

All of the Alexandrians need to start getting fleshed out (pun noted, but not intended). We need to see them away from the survivors and allow them to grow into characters that we might feel something for when they’re inevitably eaten by herd wolves. Or something.

I talked about seeing the group struggling with a herd way back in November of last year.  Then, I said:

No, they didn’t do things exactly as I imagined, but I’m still loving the idea. I’m not in love with the idea of the quarry, however.

Firstly, it seems bizarre than the one quarry, no matter how large (and it simply wasn’t very large) would “catch” so many walkers as to keep Alexandria nearly walker free. Secondly, if you could build walls and car fences and organize a planned 20 mile march… why not simply herd the walkers back into the quarry? A kind of macabre carnival ride ending where a shambling line ends with lots of bone crunching and splatting? Finally, why no attempt to deal with the walkers in the quarry? Perhaps a barrage of molotov cocktails? Contained in the quarry and fed by walker meat such a fire could easily grow to destroy at least most of them without too much risk to the surrounding flammable countryside.

I’m excited by the storyline, but it does seem like our heroes are taking the long way home.