Three Random Thoughts on The Walking Dead, “Here’s Not Here”

Posted by kiwidust on November 6, 2015
Posted in: Televison. Leave a Comment 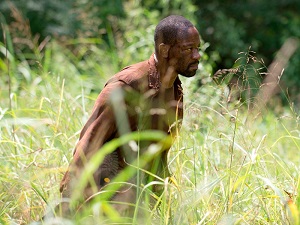 Here are  three random thoughts on The Walking Dead episode 604, “Here’s Not Here“. This episode was a solid punch to the bean-bag in more ways than one.

I Love You, but Get Over Yourself

Heading into this episode, one of the recurring themes was the secrecy used to film the episode. The script was only handed to the principle actors at the last minute! They filmed it out of order to throw off the press! They kept everybody cloistered for the filming!

Sorry, guys. It’s just a TV show! More importantly, in this case, this episode just wasn’t worth keeping all that secret. Don’t get me wrong, I loved the episode, it may be one of my favorites in the show, but it was a bottle episode that has no real impact on the main story. The only one that survived it (beyond Blondy and Crutch-boy, I suppose) was Morgan himself. It was clear that something like this happened to set Morgan’s new character.

I loved it, but “surprising” it wasn’t.

Are the Dead getting a Little too Easy to Take Down?

Amazingly enough, I’ve another meaningless, criticism! (Honestly, folks, I love this show!) We’ve been told for decades that to put down a zombie you have to brain them. As Jeremy Thompson said so well in “Sean of the Dead”, taking out the dead means “removing the head or destroying the brain”. On the show, for some time now, this seems to have become “give the brain a solid poke… or just hit it hard.”

Now a single stab to any part of the head turns off walkers like a light. So does a hit with a staff, rifle butt or rock. I’m not against it, but I am curious about the biology involved. Is a walker brain in some kind of tenuous equilibrium where a sharp rap on the noggin can destroy it? Is there some kind of anaerobic bubble inside there that, if broken, stops whatever reaction is keeping the walkers walking? Is it, as somebody recently said, just a TV Show and I should stop analysing every damn little thing?

So, as I said, we all knew that something like this was going to happen, right? They might have gotten away with a single, powerful event that set him back on the path to sanity, but it wouldn’t have explained his new skills or his new outlook. It also would have felt trite, silly and overly simplistic. No, a change like this only makes sense with the help of other people.

It’s something the show excels at: showing us how those around us change us. Sometimes they make us stronger, sometimes weaker. Michonne has come to rely and depend on having people around her, and is a better, happier person for it. The Governor’s desire to protect those he loved twisted everything good in his life and resulted in catastrophe.

Mogan needed somebody else to pull him back from the brink. Somebody to remind him that he’s better with people and, more importantly, that he can choose what kind of man that need makes him. Eastman gave Morgan the tools to do that.