Zombie of the Week: Eddie Winter

Posted by kiwidust on February 14, 2016
Posted in: Zombie of the Week. Leave a Comment 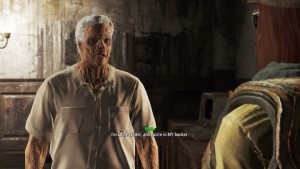 We’ve been playing Fallout 4 on the PlayStation 4 since its release on November 10th (you can follow our playthrough diary at our sister site, DepressedPress.com). We celebrated its new, more aggressive ghouls a few days later on November 15th. But what about the many interesting ghouls that don’t want to immediately chew your face off? This series is for them!

The ruins of Commonwealth police stations are littered with evidence of Eddie Winter’s wrongdoing and it seems clear that had armageddon not distracted them, the police would have been able to put Winter behind bars. It turns out that this would have been a very long time as Winters, obsessed with immortality, subjected himself to bizarre radiation experiments. Eventually they turned him into the very first ghoul!

This is the 150th Zombie of the Week; that’s nearly three years of zombies! We are desperately running out of ideas! Please contact us with suggestions!