Zombie of the Week: Arlen Glass

Posted by kiwidust on February 7, 2016
Posted in: Zombie of the Week. Leave a Comment 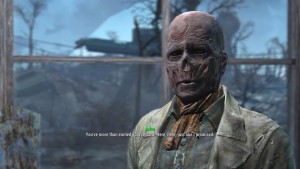 We’ve been playing Fallout 4 on the PlayStation 4 since its release on November 10th (you can follow our playthrough diary at our sister site, DepressedPress.com). We continue to celebrate our favorite ghouls of the game.

This week, we bring you Arlen Glass, an absolute sweetheart. Arlen is the handyman at The Slog, the all Ghoul farm that you’ll likely run into fairly early in the game. You’ll learn later than Arlen was the lead toy designer at Atomatoys and head of the “Giddyup Buttercup” line of robot hobby horses.

He left the company when his superiors accepted military contracts and, shortly thereafter, was turned into a ghoul in the nuclear holocaust. One of the most poignant moments in the game comes when you bring Arlen a 200 year-old holotape allowing him to hear the voices of his lost wife and daughter.

Here’s to you, Arlen, making an old, fat gamer cry.

This is the 149th Zombie of the Week; that’s nearly three years of zombies! We are desperately running out of ideas! Please contact us with suggestions!