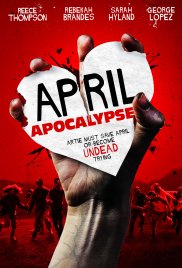 Artie (Reese Thompson [IMDB]) is in love with his best friend April (Rebekah Brandes [IMDB]) and has been since they were kids. For the first third of the movie, this is the only story you’ll get and it’s straight out of a Disney tween show. Artie’s in love and April is oblivious. She dates jerks, he rejects perfectly reasonable alternatives and they both dance around the obvious. He gets his ass kicked by her latest mistake, they finally have a real conversation and she moves away.

The story jumps forward several years. Artie’s still in love with April, but hasn’t spoken to her in forever. He’s living in his parents basement, pouring his soul into a home radio station that nobody listens to and is unable to break out of his depressive rut. When he finally decides to take his chance and leave home to find April – wouldn’t you know it – society collapses into a zombie apocalypse. Artie faces this new reality, sets his jaw… and whines. A lot.

Positively, quality overall is high. The technical work is uninspired, but solid. In line with what you’d expect from a Disney tween show. The same can be said for the acting. Many of the actors are television veterans, but unfortunately most of the them are given small roles with little screen time to work. Those given the most screen time are the least able to take advantage of it, but are still adequate.

Negatively, most everything else. The biggest issue is a complete inability to maintain tone. It seems to have been marketed as another entry in the growing roster of zom-coms, but simply isn’t funny. It poses more as a straight romance, but is unable to muster the focus that requires. Instead, it lathers on ham-fisted romantic pathos through heavy-handed narration (oh lordy, so much narration!) and flashbacks (oh lordy, so many flashbacks!). In turn, this contrasts terribly with the zombie apocalypse which comes off as nothing more than a nuisance.

Scenes fail to flow naturally from one to another. The story feels like a piecemeal a collection of vignettes rather than a single movie. It also lacks a sense of scale. It clearly tells us that April moved far from Artie – too distant to make their friendship work – yet throughout his journey he never seems to leave his home town. In fact much of the trip is inexplicably made via a golf cart. We’re left with the sense that April, our holy grail, was never more than an afternoon bike ride away.

Some massaging of the script, a little rearranging of the scenes and a whole lot less narration might have pulled this one out of the doldrums. As it is, it’s a technically competent film that couldn’t decide what it really wanted to be, so it ended up nothing. That said, if you’re really into Disney tween shows, then hey, this could be right up your alley.