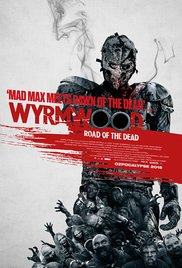 “Wyrmwood: Road of the Dead” on IMDB

Zombie movies can be traditional. Slow shamblers mindlessly hunting terrified survivors clutching improvised weapons and cowering in boarded up homes. Others try to take things up a notch. Fast zombies in hordes of hundreds or thousands flooding through cities and being repelled by military units. Some pull at the heartstrings with infected children or spouses descending inevitably into savage hunger.

Then there’s this one. This one takes a long pull from a warm beer and says, “what the hell?”

The stage is set normally enough: a passing meteor shower has had devastating effects on humanity. It’s turned (nearly) everybody into mindless, ravenous monsters with bad skin, scary eyes and a need to feed. Additionally, because reasons, it has also fouled all flammable liquids. Gasoline, diesel, kerosene and everything else are all useless. None of this is explained: this isn’t that kind of movie.

That would be enough for most, but there’s a whole bag of additional crazy splattered against the wall. Surprisingly, most of it sticks. Sadistic military forces driving around (without gas)? Sure! A mad scientist with a flare for disco? Sure! A random ability to telepathically control zombies? Sure! Most of this isn’t explained, either. Again, not that kind of movie.

The story follows two paths. Our hero, Barry (Jay Gallagher [IMDB]) represents the men with gearing up montages, Motorsports and shooting things with nail guns. There’s beer and swearing and bonding. His segments are more traditional, head-on affairs. His sister, our heroine, Brooke (Bianca Bradey [IMDB]) begins as a cliched damsel, but quickly evolves into a very different kind of badass. Her moments are more subtle, with more of a focus on subterfuge and body horror. The balance between the two, intentional or not, works very well.

In many ways this is a throwback to the good old days of zombie flicks. No social commentary, little pathos and a whole lot of loud, brash badassery. It takes big chances and, probably more through luck than design, succeeds more than it fails. Most importantly, it’s huge fun.