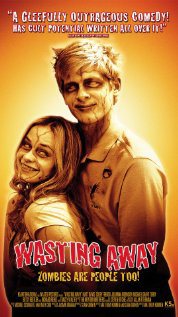 “Wasting Away” on IMDB

[This review was originally published at our sister-site, DepressedPress.com on April 9, 2012 and was a selection for Boiled Eggs and Brain Eaters 2012.  Note that this movie is listed as “Wasting Away” on Internet Movie Database but as “Aaah! Zombies!!” on Netflix – no idea why, but low-budget movies often have identity issues.]

The hook is that the action is predominately from the perspective of the zombies, who believe that they’ve been “saved” from a horrible plague by a super-soldier serum that’s given them super-powers.  The plague is turning the rest of humanity into super-fast, mindlessly aggressive drones that for some strange reason keep trying to destroy their brains.

The gimmick is indicated – cheaply but ultimately effectively – by switches between color (the zombie’s perceptions) and black-and-white (the “real world”).  The zombies see others as fast-moving, chipmunk-voiced and cartoon-like – others see the zombies as, well, zombies.  Special effects are borderline at best but the use of cheap practical effects is always better than cheap CGI.

Acting is serviceable and many of the characters are successfully likable.  The script is rough but works and for the most part stays on point with several main themes including a sweetly realized love story.  As you might predict with a concept film like this the ending just kind of trials off in several directions without ever truly succeeding in making a point but the ride is nice.

If you’re a genre fan, you’ve already sat through much worse movies with much less to say.  Our verdict on this one (my daughter’s favorite so far this year) is “give it a try.”

2 comments on “Movie Review: Wasting Away”