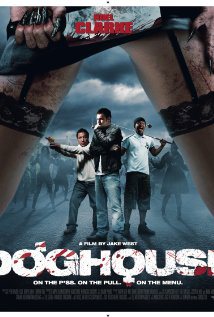 [This review was originally published at our sister-site, DepressedPress.com onAugust 25, 2012.]

The premise here is somewhat promising: a group of misogynistic friends piss off the women in their lives to take their friend on one last bender before he gets married.  Instead of whatever the equivalent of Las Vegas is in Britain they rent a bus and head to a tiny, remote village (and the presumably empty house of a grandmother).  When they get there they discover that the entire female population has been turned into cannibalistic zombies.

The movie starts out strong.  We meet all the characters in a quick, frenetic, heavily cut sequence that will have most people thinking of Guy Ritchie.  It sets the tone well and let’s us know very quickly that we shouldn’t be taking things too seriously.  It really got me excited for the movie and had me looking forward to more.  Unfortunately it’s also the very best part.

The movie has some severe trouble trying to decide what it wants to be.  There are moments of pure horror, wacky spoof, action and silly romp.  It pinballs between them at a breakneck pace never letting the audience get comfortable with a concept.  We have serious attempts to drum-up emotion when we watch a favorite character die horribly followed by extended slow-motion sequences of an enormously fat zombie in a negligee and curlers running.  It’s like George Romero asked Benny Hill to choreograph a film.

There’s some great potential – as when the gang is trapped in different small shops in the center of the village and make do with the materials at hand to defend themselves.  The zombies are interesting if incredibly one-dimensional: there’s “The Bride”, “The Snipper”, “The Barmaid”, “The Witch”, “The Dentist” and so forth.  It’s essentially transferring strip club stereotyping and applying it to Zombie women but in context it almost works.

The movie’s clearly trying to replicate, to some degree at least, the success of “Shaun of the Dead” [IMDB] but just can’t manage it.   There are some great actors here – people I was really excited to see – so I have to blame the schizophrenic script and direction.  For real genre fans there might be enough to pull you in but there are definitely much better examples of the seven or eight movies this is trying to be.