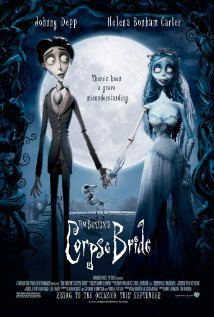 “The Corpse Bride” on IMDB

[This review was originally published at our sister-site, DepressedPress.com on November 11, 2012.]

This one just kind of slipped through the cracks on me.  I tend to watch all of Tim Burton’s [IMDB] movies even tho’, let’s face it, they are getting more than a little samey.  But this is an older one and, as it turns out, one of the better ones.

The plot is pure Burton.  It has been arranged for Victor to marry Victoria.  Nervous at marrying a woman that’s he doesn’t know Victor takes a walk into the woods to practice his vows.  Rising to the occasion he delivers such a moving rendition that he awakens the soul (and corpse) of a bride murdered before her wedding who assumes that they are now married.  This, as you might guess, leads to some awkwardness with his actual fiancée.

The movie is stop-motion animated and a spiritual (no pun intended) successor to the classic “The Nightmare Before Christmas” [IMDB].  There’s something wonderfully concrete and solid about stop-motion.  When done well, as it is here, nothing can beat it.  The film is lush with detail and personality that CGI or traditional cel animation simply can’t match.  The performances are well-matched and moving and the film is populated with a background cast of highly entertaining bit players.

On the negative side The story is a little sparse.  The character motivations are scattered and generally unbelievable.  Sadly the female characters, who you might expect to be much stronger, are rather weak and completely driven by a rather fickle Victor.  Still, at less than 80 minutes (with credits) it’s not hard to forgive a lack of depth.  Oh, the ending is almost patronizingly contrived as well.

If you’re a fan of Burton then you’ve probably already seen this anyway and have made up your own mind.  But if you let it slip through the cracks like I did, give it a shot.  It’s a little vapid, yes, but it’s a perfect example of Burton’s particular brand of dark, gothic humor.