Posted by kiwidust on November 18, 2013
Posted in: Televison. Leave a Comment 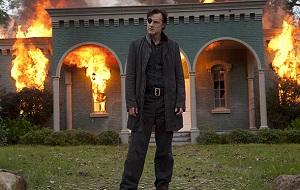 Here are a few random thoughts on The Walking Dead episode 406, “Live Bait“.

Some Annoyances, Up Front and Out of the Way

I sometimes feel like all I do is whine and complain about minor . I’m going to try and stop that. Right after this section. I promise.

So these four people have been living, basically, in this one apartment the whole time and nobody else found them? More meaningfully how did nobody find the big truck just jam packed with beef jerky?  Our group has been scavenging for months and months and you’d have to assume others have been as well – it seems very odd this kind of low-hanging fruit would still be intact.  How in the hell long does an oxygen tank last in Georgia?  We’re told that they packed up a “bunch” of oxygen tanks and the food and have been holed up ever since.  Even if the tanks lasted a week (and they don’t, nothing like it) they’d have needed, what, over a hundred?  Lastly, we’ve really gotta stop pretending that every car we find can start right up after two years.

The Governor’s Back.  Yay?

Taken at face value I really loved how the Governor was portrayed in this episode.  Much of that was solely due to the skill of David Morrissey who’s subtle characterization has created a significantly more believable personality than the rather two-dimensional comic original. Watching him sort through, and then rise above, his personal demons gave me some hope that we might, just might, be seeing actual character growth.

I said before that I was never at all excited about the revenge angle.  It’s been done to death and a mean, sneaky Governor attacking the prison held very little interest to me.  I’m worried that they may still be going in that direction, but I’m hoping not.  A repentant Governor, one that may be willing to accept the judgement of his former enemies and victims, even ultimately sacrifice himself,  to gain sanctuary for his new wards – now that could be interesting!

I’m still not completely on board with the idea that Lilly and her family were able to survive that long, that ignorant of the new realities of the world. It did create an effective counterpoint with the governor’s past. Here being people completely unaware of those realities taking in a man that recently had done all he could to control them.  I have no idea why he threw the SpaghettiOs out the window, but, dammit, it meant something important.  Could it have been that, at that point, he simply refused to take any kindness?  Could it have been that a meal targeted primarily at children brought Penny’s loss back into focus?

I think it’s pretty likely that we’ll have at least one more episode completing the Governor’s flashback story before reconnecting with the main thread.  The big question will be, “what have Martinez and Shumpert been doing this whole time?” I’m also going to stake my claim that Carol will, eventually, be part of their group, but whether as an active member or a prisoner I’m not sure.  It may also be a path to returning Carol to the group.  Perhaps she’ll do something to warn them or, more simply, suffer enough to be accepted back as penance paid.

However it unfolds I truly, deeply hope that they at least attempt the road less traveled. I said last week that I wasn’t pleased with the idea of stirring up the Governor’s story-line again but I’m happily willing to change my mind if we’re given something more interesting than simple revenge.