Random Thoughts on The Walking Dead, “The Grove”

Posted by kiwidust on March 17, 2014
Posted in: Televison. Leave a Comment 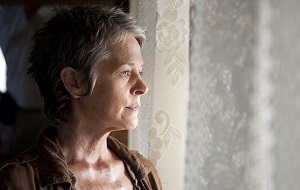 Here are a few random thoughts on The Walking Dead episode 414, “The Grove“.  I deeply appreciate these slow, thoughtful episodes and this one was a hum-damn-dinger.

Lizzy and Mika’s story has come to an end with a trademarked Robert Kirkman gut-punch.  As always, it’s the kind of hit that leaves us gasping on the ground, vomiting up bile, but still asking for more. The genius of The Walking Dead is that it specifically explores the long term effects of extended traumatic situations. It allows the adrenaline to dry up long enough for the brain to realize what’s happening to it. That sense of constant, permanent dread and loss takes a huge toll, especially on somebody, like Lizzy, that’s unstable to begin with.

I have to admit that, even having read the comics, I wasn’t prepared for Mika’s death. I was reading the situation, perhaps with “TV Goggles” on (where things might get bad but never that bad), incorrectly. I expected Lizzy to “show them” by killing herself – for them to walk into her room and find her hanged. Or for her to get bit while attempting to prove that the walkers were friendly. It still seems odd to me that she would turn Mika but not herself, actually.

How Not to Deal with Crazy People

As serious and effective as the episode was, I still feel the need to be a snarky jerk on at least one point: when a clearly insane person says, “I know what I have to do now”, you ask them to clarify. Get details. Ask them to draw you a diagram with citations from reputable research sources (no Wikipedia)! Under no circumstances, ever, do you assume that you and they are “on the same page”.

Seeing Lizzy happily playing tag with bitey death should have been more than enough to put her on notice. No more babysitting duty, no more free-play, no more alone time at all. Yes, she proved herself in the episode with the fire walkers, but a few bullets to a smoldering corpse doesn’t fix crazy. I’ll not go so far as to say that Carol or Tyreese are to blame, but they did seem to miss some obvious signs.

Lizzy’s particular brand of Cocoa Puffs always struck me as a bit strange in any case. It points to one of the show’s few bad habits, in my opinion: it sometimes overloads characters with traits or actions that seem counter-intuitive. It never sat well with me that Lizzy presented both sadistic tendencies, as she displayed with the rabbits, and an over-developed sense of empathy with the walkers. The two are both definitely crazy, but not consistently so and it nags at me.

Similarly, I was confused seeing Daryl, a character built for practical survival, filling a bag with useless money and jewels. It was counter-intuitive and uncharacteristic. Maggie leaving Bob and Sasha, when she did, is another example. She didn’t simply decide not to stop when they did, she left them defenseless and put herself in danger for no logical reason. While Maggie absolutely loves Glenn, she is clearly the more pragmatic of the two. Her action led to some great TV, but still felt out of place.

I’m glad that the truth is out between Carol and Tyreese. It was good to see Tyreese forgive her so readily. It created a nice counterpoint to the futility of the rest of the episode, but I would have also been happy with a less clear-cut resolution. Allowing Tyreese a little time to process wouldn’t have been unreasonable.

The Fire Walkers and Other Thoughts

I wasn’t really clear on the origin of the fire-walkers. I hope I wasn’t alone in assuming that the smoke the survivors could see over the trees was the moonshiner’s cabin Beth and Daryl set afire. As Beth and Daryl are the only group that hasn’t seen the signs for Terminus I felt it a good way to both connect the timelines and hint that they were, at least, heading in the same general direction as the others.

As cool as it looked, it seemed odd that the walkers would still be smoldering after shambling all the way to Carol and Tyreese’s pecan grove.  This would seem to make the fire much closer than it appeared (and possibly worth at least checking out).

Little things irk me, like the fact that nobody mentioned that the stove still worked. Was there a tank, on-site? Couldn’t they have just walked it past it once if not called it out in passing? With the amount of time that’s passed, it’s getting sillier and sillier to see things like this just work. Cars starting up with fully inflated tires is another one. Speaking of cars – didn’t Carol have a nice one? Where did that go? Why is evreybody walking now?

The episode was masterfully produced and performed. The arc, from happy acceptance at finding a safe place to desperate tragedy, dragged the audience around bodily. Special mention has to be given to child actors Brighton Sharbino (Lizzie) and Kyla Kenedy (Mika) who displayed amazing sensitivity.