Zombie of the Week: The Emerald Cockroach Wasp

Posted by kiwidust on March 23, 2014
Posted in: Zombie of the Week. Leave a Comment 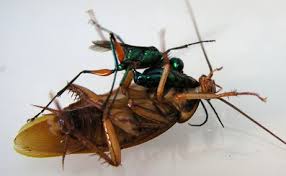 This week we celebrate not the zombies, but the hardworking, entrepreneurial zombie creators! The Emerald Cockroach Wasp, indigenous to Africa and Asia, takes its role seriously. Most zombineers tend to phone in the actual zombie creation. Having spent all their time creating a virus that flies in the face of all that is holy, or a gas that reanimates the recently deceased, they often just toss it in a river. Not the Emerald Cockroach Wasp, my friend!

The wasp begins by finding a nice, healthy strong cockroach. It then applies a quick sting to the motor ganglia which paralyzes the roach’s front legs. That keeps the path clear for the following sting: straight to the brain. This amazingly precise shot disables the roach’s escape reflex – and does nothing else.

The wasp now examines the zombified roach and will sometimes clip its antenna; this is believed to regulate the level of venom in the roach through fluid loss. It then leads the shambling, mindless roach to a burrow. There it implants an egg and, finally, closes the nest behind it. The egg hatches three days later and the larva spends the next week or so feeding on the roach until it finally burrows in deep and pupates. After a single mating a female wasp will zombify several dozen roaches over the course of a month or two.

Here’s to you, you creepy, freaky little wasp!