Random Thoughts on The Walking Dead, “Us”

Posted by kiwidust on March 28, 2014
Posted in: Televison. Leave a Comment 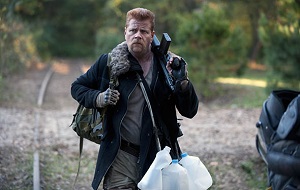 Here are a few random thoughts on The Walking Dead episode 415, “Us“. We ended up watching the episode nearly a week late. Life does have a way of spoiling your plans sometimes.

Glen was kind of a dick to Tara, wasn’t he? His single-mindedness was understandable and emotionally solid, but considering the time that had passed it seemed like he would have finally begun to internalize the long game. It should have settled in that it might take a while to find Maggie and that he would need to conserve his resources (and friends).

Still, he did the right thing and stuck by Tara when pressed, even if he did put her in that position in the first place. Besides, who cares, Maggie and Glen are back together! *smoochy-kissy-face-huggy-pie* Burning the photo was… weird, but sweet in a weird way.

The reunion was just as sweet and passionate as we hoped it would be. It was surprising to see Glen almost immediately lie to Maggie about Tara. What are the odds that it will create tension later? Also, what are the chances that they’ll finally set up some kind of contingency plan for being seperated? Maybe? Guys?

Daryl and the Rules

The “claimed” rule bothered me a bit simply because our introduction to this group was a petty, violent fight over a bed. The group, there, showed none of the barely-contained self-control that seems to be the only thing holding it together. It also seems odd that such a group would bother to pursue a vendetta against Rick for so long, but it may just be “something to do”, I suppose.

I think it is pretty clear that Daryl is with the group because Daryl needs to be with somebody; anybody. That he finally adopts the rules speaks to his final acceptance of Joe’s reasoning. So far at least, it has clearly worked to keep the peace. Time will tell, but I think that it’s only a matter of time before there’s a clash over something (or someone) “claimed” by somebody else.

I’ll lay my bet on the table right here: Terminus is full of cannibals. The nice lady might have just been doing some daily chores but the barbecue and stew pot were, I tells ya, foreshadowing! She’s going to “make them a plate” – foreshadowing, people!

That’s my bet, but there are really only two ways that this works out. The first option is that Terminus really is nice and rosy and sweet. That means that we’ll get to know it just enough to love it before it’s attacked by some larger, nastier force. The other is that Terminus is bad, bad news and the season will cliffhanger off of that. This is a drama after all.

I’m clearly laying odds on the latter but I’m doubling down on post-apocalyptic, person-pie-preparing, people-eaters!