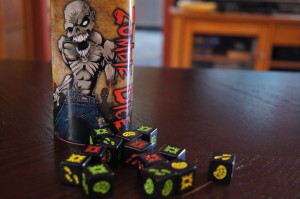 More BEBE 2014!  Our third movie, “Rise of the Zombies“, was much better than our second, but still dumb as hell in that trademarked Asylum Films kind of way. Since it’s time to start working on getting dinner going we’re taking a game break before our next selection, “Detention of the Dead“, kicks off.

My son is trying out ZombiU on the WiiU. So far it looks like a decent survival-horror FPS with some forced integration with the WiiU game pad. It’s hard to tell from only a few minutes: this one could still go in either direction.

We played a ridiculously long round of Zombie Dice by Steve Jackson Games. This is one of our favorite games and an absolute must for any zombie fan. The rules are insanely simple: roll three dice. Keep any brains and shotgun blasts, put any runners back in the can. You can stop at any point and bank your brains, but three shotgun blasts means that your turn is over and you lose any unbanked brains. First person to 13 wins.

It’s fun, quick and easy enough for anybody to play in minutes. Most games take about ten to twenty minutes, but the round we played during the movie lasted over forty. I ended the game with zero points having rolled triple shotgun blasts at least nine times. My lovely bride won: parents rule, children drool!