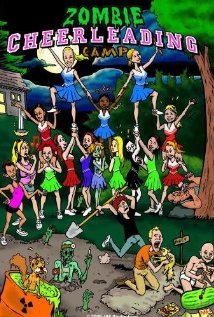 This was our second selection for Boiled Eggs and Brain Eaters 2014. It was a tough one.

The movie starts with a horrible little comic-strip, slide-show thing. Set to cliched public-domain “monster music” it wordlessly gives the audience the hackneyed back-story.  Nazi’s made zombies, U.S. soldiers took the formula home and buried it and, finally, a curious squirrel dove into it. It was coarse, ugly, poorly-done and, as bad as it was, so very much more interesting than the actual movie. Imagine, to illustrate, if the entire story of “Raiders of the Lost Ark” was condensed into a terrible five-minute PowerPoint presentation and the actual movie was all about janitors in in the warehouse where they stored the Ark.

The idea, of course, was to do an 80’s-style teenage romp. The ingredients are pretty simple: a bunch of hot teens, a despicable authority figure with a comically inept toadie and a place. The absolute worst version of all of these are collected and then zombies, which have become a kind of universal condiment for bad movies, are tossed in. The villainous authority figure, the camp’s trainer, is totally forgettable. Her toadie/son is the most insulting and humorless version of the traditional gay stereotype. The camp is… a camp. I guess some things you really can’t screw up.

The 20- and 30-something “hot teens” are each assigned a single personality trait; each more annoying than the last. The movie really wants to be a low-budget teenage romp but it doesn’t have the budget for it. Instead it seems to have blackmailed one poor actress, out of eight or nine, to carry all of the nudity in the film. While she’s admittedly hot enough, her scenes feel forced, out-of-place and terribly, terribly sad.

When the highlight of your movie is a ridiculous two-minute fist-fight between a man and a non-animated, stuffed squirrel you may want to rethink your plans. Completionist genre fans with absolutely no other choices  might want to give this a try. Everybody else should steer clear.