Zombie of the Week: GUH 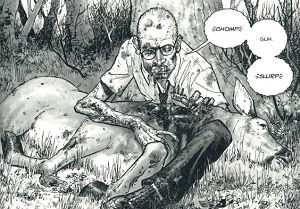 We continue our comparisons of Walking Dead: the Comic to Walking Dead: the TV Show. It’s still difficult coming up with a clever zombie every week, but we’re thinking we can milk this for a few more weeks at least.

Here’s GUH, from the third issue of “The Walking Dead”, from December 2003, written by Robert Kirkman and drawn by Tony Moore.

He’s a sharp, erudite, upwardly mobile fella with a lot going for him; or maybe a lot gone from him. He considers himself something of a “foodie” and immediately offers to share his bounty of gnawed deer carotid with his brand new friend, Shane and Rick.

They refuse. GUH, however, is nonplussed. Modernist cuisine just isn’t for everyone.