Movie Review: Rise of the Zombies 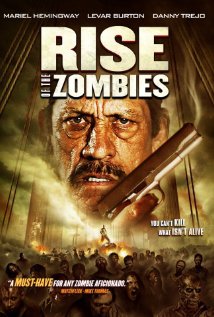 “Rise of the Zombies” on IMDB

This was our third selection for Boiled Eggs and Brain Eaters 2014. It wasn’t good. It was, in fact, so not good that I needed to watch it again. I literally could not remember enough about it to start this review.

The only thing they did right was plastering Danny Trejo [IMDB] on the box. That’s honestly the only reason we, and I assume others, watched the movie. Seeing Levar Burton’s [IMDB] name was just icing on the cake. Of course neither one of them really stars (although Burton’s comes much closer than Trejo) and most of the time is spent in other locations with other people.

That’s one of the biggest problems with the movie: it sets up the trite, but still potentially interesting, idea of people riding out the zombie apocalypse on Alcatraz island. It’s a perfect place, really, if you could stock it. An empty super-max prison on an island; what’s not to like?  Apparently, something, because we spend almost no time there. Instead the story splits into several confusing threads and ping-pongs between them in a frantic attempt to keep it all straight.

There are a few moments where interesting things actually happen, but they’re scattered and completely overwhelmed by the schlock. Burton’s thread revolves around the science of zombies and is probably the most successful overall, but is hamstrung by the terrible script. It forces him to do ridiculously silly things that completely undermine everything else. A few other moments come close to working only to fall apart.

I won’t begrudge anybody an easy paycheck, but the cast deserves better. It’s as formulaic as they come and poorly executed to boot. Watch something good again before you waste your time on this.

2 comments on “Movie Review: Rise of the Zombies”