Zombie of the Week: Gar

Posted by kiwidust on June 1, 2014
Posted in: Zombie of the Week. Leave a Comment 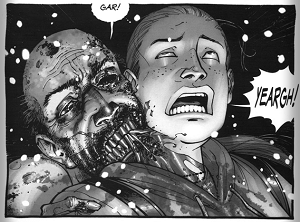 We continue our comparisons of Walking Dead: the Comic to Walking Dead: the TV Show. We’re probably getting into spoiler territory here, but dammit, the comic is 10 years old. People die in it; like all the time.

Here’s GAR. He’s from the fifth issue of “The Walking Dead”, from February 2004, written by Robert Kirkman and drawn by Tony Moore.

GAR was so worried about dating again. He had only lost his wife a short while earlier; she having taken a hatchet to the face just a few months prior. His friends all told him to “get back on the horse,” but was he ready? He wasn’t the kind of guy that women were normally attracted to. His left eye socket was full of clotted blood and puss. Ever since he coughed up his epiglottis, he had noticeable problem breath. He was bald. What woman would want him?

Amy was young, vibrant and beautiful. She was maybe half his age and totally out of his league. Could she love a former man like him? Would she be able to see past his faults into man he knew could be with her? He had only one move to try; if he could find the courage to use it.

He tore out her throat with his teeth.

The connection was electric; she responded instantly! “YEARGH,” she shouted! She shouted, “YEARGH” for him – it almost made his heart beat again! Then Shane shot him in the face.