Zombie of the Week: Wights of the White Walkers

Posted by kiwidust on June 9, 2014
Posted in: Zombie of the Week. Leave a Comment 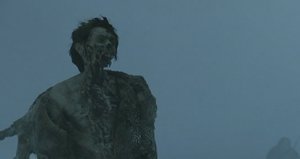 The world of “Game of Thrones” may be more about dragons, swords and incredibly stunted social and technological development (really, 8,000 years of history and nobody has decided that there must be something better than chamber pots?), but it has its zombies too. Sort of. We’ve never been sticklers for definitions around here.

When a White Walker, a monstrous race from the Lands of Always Winter (Mr Martin writes good books but is really bad at naming places), kills somebody they sometimes return as bestial wights. Like zombies they’re kind of slow, kind of stupid and kind of indestructible. Unlike zombies they really don’t mind taking a shot to the brain: they can only be killed by fire.

So, as the show winds down its fourth season, we celebrate reanimating the dead and making them do your dirty work. Admit it: if you could, you probably would.