Zombie of the Week: Frankie

Posted by kiwidust on July 6, 2014
Posted in: Books, Movies, Zombie of the Week. Leave a Comment 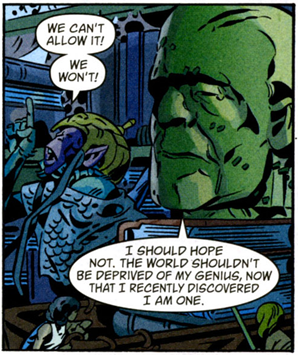 Now that we’ve gotten through the obvious, our celebration of Frankenstein’s Monster as an honorary zombie can start to dig into some of the more interesting interpretations of the character. One of my very favorites is Frankie from Bill Willingham’s amazing comic series “Fables“. Although the series will sadly end with issue #150 early in 2015, it has left an indelible trail of joy for thousands of dedicated fans.

Although a minor character, Frankenstein’s Monster, “Frankie” for short, was a memorable one. First introduced in issue #29 as part of a not-so-subtle homage to 1943’s pulp classic, “Frankenstein Meets the Wolf Man“, he was the result of a Nazi super-soldier experiment. While initially hostile, he calmed down quite  bit after being decapitated by an enraged Bigby Wolf. He spent the next decades unliving a peaceful existence in the Fabletown Business Office.

He really came into his own during the “Witches” storyline (Issues #87 – 91) when the magically expansive business office was cut off from the rest of Fabletown and left to fend for itself against the resurgent powers of the evil Baba Yaga. Frankie, having recently discovered his genius (which he missed because he rarely thought about anything) became the brains behind the operation led by the brave Ozian flying monkey, Bufkin. With the help of several unexpected allies, and no small amount of luck, they were able to liberate themselves and defeat the witch.

When Bufkin was later convinced to go on an epic quest (because that’s what heroes do), Frankie was left in the Business Office with his good friend, the Magic Mirror. As neither are particularly ambulatory we have to assume that’s where they remain to this day.