Zombie of the Week: These Guys!

Posted by kiwidust on October 27, 2014
Posted in: Zombie of the Week. Leave a Comment 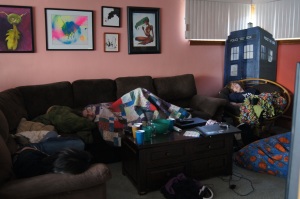 At the last minute we put together a team of my son’s friends to champion Extra-Life 2014. The charity organizes a massive 24 hour gaming marathon to support hundreds of Children’s Hospitals. This year the effort raised over 5 Million dollars. Our team, the Vidiots (feel free to donate), raised about $150 of that (the best, coolest part of it, of course).

The team didn’t quite make the 24 hour mark, but was able to do most of it. They played a lot of games, had a lot of fun but hit a wall around the 18th hour after which, yup, they were as good as zombies. After a few hours sleep they did get better… you think that actual zombies could just need a nap?