Posted by kiwidust on November 4, 2014
Posted in: Televison. Leave a Comment 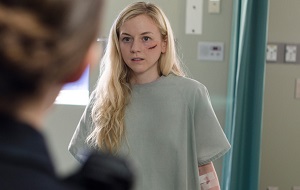 Here are a few random thoughts on The Walking Dead episode 504, “Slabtown“. I warn you in advance, I wasn’t thrilled with this one.

How is Dawn Keeping this Group Together?

While I love the idea of seeing how various groups come together and survive the fall of civilization, this one was… kind of dumb. The core idea of finding (or, more likely, abducting) people and then forcing them to work off their debt is a good one. But the implementation as depicted is weak. Dawn is an interesting character, but at no time did we ever get a glimpse of how she’s been able to hold the group together under her leadership. The only other characters we meet are either indentured servants or residents who don’t seem to respect Dawn’s leadership.

Not a Fan of Solo Beth

Beth was always an odd character for me. I never felt that the writers knew what they wanted to do with her. We have scenes where she’s the voice of hope and epitomizes our better nature. Then we have scenes where she’s utterly pessimistic and almost soulless in her apathy. They treated her like a blank slate for a long time: if they needed something said or something done and it didn’t really fit anybody else: Beth would do it.

When Judith came into the picture, she defaulted to baby-sitter and that defined her for nearly the entirety of the prison years. (As an aside, when Beth does return to the group, I’m wondering if there’s going to be a problem between her and Tyreese over who gets to be Judith’s official nanny.)

In this episode Beth finally gets her chance to really shine, but… doesn’t. She’s effective and the entire “she’s stronger than anybody knows” cliche is worked well enough, but she also seems to lack something fundamental that I’m finding difficult to articulate. She survives the hospital, but she doesn’t seem to inhabit the environment like we’ve seen the others do.

The big question is still “who does Daryl have in the bushes?” There are a few scenarios but two seem to be most obvious, one of which I’d like to see and one of which I think would annoy me.

The “best” thing, I think, is that Daryl’s scene represents the end of this mess. Carol, Beth and possibly Noah and Edwards are in the bushes. There will be one more episode explaining how Carol and Beth escape (likely, I think, with the help of Daryl and Noah) and we’re done with the hospital. The timeline could easily fit: this episode could have taken place a month or more before Rick and the gang found the church. Remember: Beth has been gone a long time. Seeing Carol at the end, however, ties the two timelines together meaning that if Carol and Beth are with Daryl then things have to move fast.

The other option is that Daryl lost Carol (again), but found Noah and it’s him in the bushes. This would mean that Rick and the group would know that Carol and Beth are both at the hospital (but that Maggie would not) and would, of course, stage a rescue attempt using Noah’s knowledge of the building. The problem is: we’ve seen this before; several times. I fear that no matter how well they might handle things, it would feel redundant.

I truly hope the disappointing hospital plot gets over and done with quickly and isn’t dragged out to a season-long morass. Still, I’d give about 60% odds that it will. As a related side-note I’ve noticed that the show tends to do really great reinterpreting segments from the comics, and creating new characters to react to them, but tends to fair the worst when it strikes off into completely original territory.