Zombies of the Week: Jaden and Willow Smith

Posted by kiwidust on November 24, 2014
Posted in: Zombie of the Week. Leave a Comment 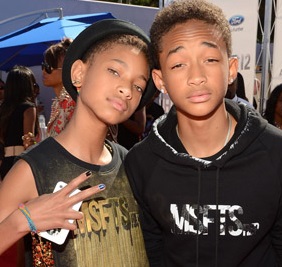 It seems unlikely that you would have missed the amazing, life-changing interview that T Magazine’s Su Wu did, “Jaden and Willow Smith on Prana Energy, Time and Why School is Overrated“. The entire piece is a stunning example of the brain damage that can occur through moderate zombification.

While most zombies devolve to base grunting and animalistic growls there are, apparently, rare cases where the ability to form words, or even sentences, remain intact. These words, obviously, mean absolutely nothing intelligible are simply the last, desperate firing of rotting neurons.

Often the the victims will appear to be responding to you directly. For example, if you mention “Time”, you’ll likely get gibberish that seems related to it. However this is a dangerous assumption as these zombies remain as intellectually oblivious as any other:

Willow: I mean, time for me, I can make it go slow or fast, however I please, and that’s how I know it doesn’t exist.

Jaden: It’s proven that how time moves for you depends on where you are in the universe. It’s relative to beings and other places. […] But it’s also such a thing that you can get lost in.

Sometimes the vocalizations seem to mimic normal, or even higher, intelligence or indicate understanding of complex ideas. Rest assured this is an illusion:

Willow: And the feeling of being like, this is a fragment of a holographic reality that a higher consciousness made.

Jaden: [bursts into laughter] As soon as me and Willow started releasing music, that’s one thing that the whole world took away is, okay, they unlocked another step of honesty. If these guys can be honest about everything, then we can be more honest.

In most cases, however, it’s clear that everything being generated is nothing but valueless gibberish:

Jaden: When babies are born, their soft spots bump: It has, like, a heartbeat in it. That’s because energy is coming through their body, up and down.

Jaden: It’s prana energy because they still breathe through their stomach. They remember. Babies remember.

Willow: That’s what I do with novels. There’re no novels that I like to read so I write my own novels, and then I read them again, and it’s the best thing.

Willow: Me and Jaden just figured out that our voices sound like chocolate together. As good as chocolate tastes, it sounds that good.

It cannot be stressed enough: despite their superficial differences these creatures are zombies and remain incredibly dangerous. Do not engage or listen to them! They will, as is normal for all their kind, rip open your skull and consume your brains at their first oppurtunity!