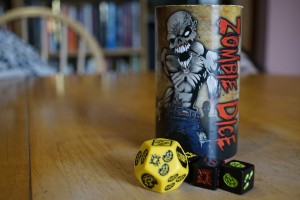 Our last new movie, “Zombie Hunter” wasn’t as bad as it could have been, but it wasn’t really what you’d call “good”. More style over substance with a lot of cliche for flavor. As you probably expected, Danny Trejo was the highlight. Here’s something to blow your mind: Danny Trejo is 70 years old. I’m 43 and can’t sleep for more than four hours without having to get up and pee; this guy pumps out at least a dozen action movies a year. I’m in awe of him.

We’ll be eating dinner soon. Simple, but good: ham, potatoes, carrots and hot rolls. Then, as per tradition, we’ll be finishing up with “Shaun of the Dead” soon. It remains the perfect family zombie movie.

We also played some Zombie Dice with the “School Bus” expansion. Zombie Dice is one of our favorite “pick up and play” games, but gotta say: this expansion didn’t do it for us. It was too complicated and slowed things down. It’s also a pricey choice at $9 ($11 MSRP). Nutshell review: skip it. 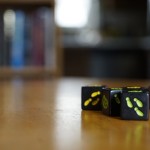 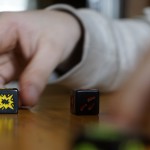 The disappointing “School Bus” die and the jelly beans we used as brain counters.