Zombie of the Week: The Crew of the Pacific Pearl

Posted by kiwidust on August 31, 2015
Posted in: Zombie of the Week. Leave a Comment 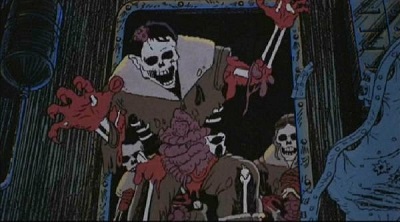 In 1981 the world was given a gift. A gift that took the form of a bunch of crappy cartoons! Some had boobs! Boobs and robots and barbarians and weird bird things and more boobs! Yes, I’m taking about that classic something-or-other, Heavy Metal!

The movie was produced by the folks that made Heavy Metal Magazine. It was an anthology of stories loosely based on features in the magazine featuring blood, violence, sex and music. The stories are linked by a strange green orb, the “Loc-Nar”, which introduces itself as the embodied “sum of all evils”.

In one of the better, but shorter and least memorable, segments, “B-17”, the orb invades a World War II bomber – the “Pacific Pearl” – limping home after a disastrous bombing run cost her the entire crew. As the co-pilot explores the cabin for survivors, the Loc-Nar reanimates the crew as skeletal zombies. The co-pilot is killed as the pilot abandons his craft to land within a graveyard of derelict planes and their zombie crews.

In the next segment, a buxom, red-headed stenographer is kidnapped by aliens and then has sex with their robot, voiced by John Candy. So… there’s that.

This is the 126th Zombie of the Week; that’s over two years of zombies! We are desperately running out of ideas! Please contact us with suggestions!