Random Thoughts on Fear The Walking Dead, “So Close, Yet So Far”

Posted by kiwidust on September 1, 2015
Posted in: Televison. Leave a Comment 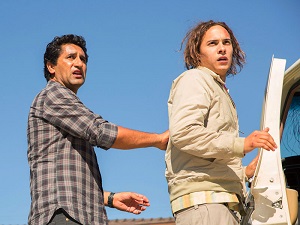 Here are a few random thoughts on Fear The Walking Dead episode 102, “So Close, Yet So Far“. This spin-off, set in Robert Kirkman’s “The Walking Dead” universe, follows a wholly original cast of characters during the initial days of the outbreak.

Just Leave the Kids and Run (No, Really)

We’re only into the second episode and it’s official: every single problem in the apocalypse is caused by kids. Nick spends the whole episode looking for drugs or putting other people in danger looking for them. Alicia spends her time ignoring her mother, although thankfully they’ve toned down her attitude 30 or 40 notches. Travis ignores everybody and gets his family trapped in downtown L.A. Even Tobias, whom I’m both really happy to see more of and was one of the few characters with anything sensible to say, decided to silly slap his way through his first zombie encounter.

I have teenagers of my own. I know they’re huge pains in the ass, but I’m also pretty sure that if the kind of things going down on this show were going down they might lighten up just a little bit. They might even shut the hell up and listen to me for a little while. If nothing else, it would be nice if we could start tracing some of the main character’s problems to the actual zombies and not to their dumbass kids.

In their begrudging defense, we also did here a lot of questions go unanswered and critical information not being relayed. Here’s a hint folks: information is power. In the apocalypse talk to each other!

We heard a lot of great ideas in this episode, but almost no actual follow-through. Loading up the car with supplies and heading to the desert isn’t a terrible plan, yet nobody did it. Tobias had the right idea, but what happened? I know Madison was overwrought at having to kill her friend, but she seems like a strong, pragmatic person: wouldn’t that have driven home why she needed to fill up that cart with food and water? Yes, Alicia was nursing Nick, but even after Madison got home nobody was gathering supplies or packing. The only person we saw successfully stocking up was the one cop.

Speaking of that, is it just me or are the cops getting painted pretty poorly overall? There’s clearly an intimation that they “know” what’s going on, but won’t say. We see Sargeant McLooty and then the police arguing with the protesters. All of this culminates in a line of faceless, armored storm troopers pushing lock-step through the rioters. The police haven’t had the best reputations in this world. On “The Walking Dead” Dawn’s iron-fisted hospital dictatorship cost Beth her life and even Rick, our hero, has definitely had his share of crazy power howls. I’m hoping this doesn’t turn into too much of a cliché on the new show.

The quote of the night was definitely from Tobias: “When civilization ends, it ends quickly”. We’re all waiting for the big break, the final screaming collapse of law and order that we know is coming. How much longer can Madison and her fractured family hold out hope that things will get better?