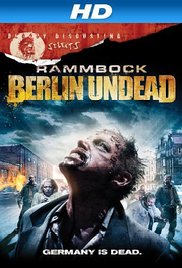 This was something of a compromise. We know that some great horror comes from abroad,  yet we still have trouble getting the children to suffer through subtitles. How could they possibly pull themselves away from their phones long enough to read a movie? It was very highly recommended and also very short – just over an hour – so, subtitles be damned, we gave it a try.

Michael has made the bad decision to head into Berlin to return a key to Gabi, the girlfriend that dumped him. He’s convinced that he can win her back, but when he gets there, she’s not home. He lets himself in to find a kid, Harper, working on her plumbing. Before he can decide how to proceed, all hell breaks loose: an infection is sweeping the city. People turn feral and attack each other. Michael and Harper are able to barricade themselves in the apartment as the rest of the building is overrun.

The story revolves around the few survivors of the building.  They communicate quietly across the common courtyard (noise attracts the infected) and try to work out a plan. How do you get to another apartment? How can you trade resources? Who can you trust? Michael, of course, remains focused on finding Gabi; often to the frustration of his allies. Motivations are clear but, more importantly, the characters act realistically. They earn our sympathy.

The filmmakers use the limited budget very well. The action sequences are well done and, thankfully, not over-done. They’ll remind genre fans of those from “28 Days Later”. The movie could, in fact, easily be considered part of that franchise. The story and character development suffers slightly from the short length, but leaving the audience wanting more is always preferable to boring them.

Even the kids enjoyed this, sub-titles and all. It’s a solid, if not wholly original, story with an interesting slant. Fans of more modern “fast zombie” stories should feel right at home.