Zombie of the Week: Islamic Jesus

Posted by kiwidust on April 4, 2015
Posted in: Zombie of the Week. 2 comments 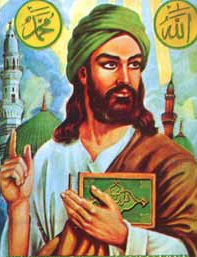 [We’re interrupting our weekly review of zombie cosplay to honor Easter in the best way we know how.]

You may be ready to call additional shenanigans on us because, as you remember, we celebrated Jesus as Zombie of the Week two years ago, and then Mormon Jesus last year. Well, it looks like there’s just a whole gaggle of Jesus’s! Jesui? Jeezes?

This one may be pushing things tho’. Islamic Jesus was an important messenger of the big “g” God, but was neither the son of God nor God himself. He also wasn’t crucified; which probably gets him resentful looks from Christian Jesus at parties. Instead he was assumed bodily into heaven. Some sources see Islamic Jesus as a precursor to Muhammad, other says that he’ll return to fight the anti-christ. One sect just believes that he was a really nice guy, but just a guy. One who ditched the middle-east then died in India.

So, the big question… is Islamic Jesus a zombie? That’s hard to say. I mean, on one hand you could argue that if he went to heaven (which is kinda dying) then came back as Muhammad then Muhammad is a zombie Jesus. On the other hand, I’m getting very bored by this whole thing. Makes me pine for the simplicity of Jewish Jesus, who just plain died.

No matter what your opinion is, it doesn’t matter. This is my site and I make the rules. And I say that Islamic Jesus is such a zombie!

2 comments on “Zombie of the Week: Islamic Jesus”