Check!  Only three this year, but everybody watched all three, even the teenagers! We’ll be doing full reviews of all of these in the coming weeks:

Of course this weekend was kind of a perfect storm of nerd for us with the new seasons of both Doctor Who and Mystery Science Theater 3000 being released. We admit to cutting BEBE short to enjoy the first episode of MST3k (which we backed on KickStarter), “Reptilicus“. We were worried about the new cast, but the franchise is in very good hands!

Check! Too much Platter’s Chocolate and, as we’ve done since 2015, Crafty Zombie Cupcakes (although these didn’t come out very well since we tried to use last year’s decorative chocolate). Dinner was an obscene amount of ham, smooshed taters and fried corn. 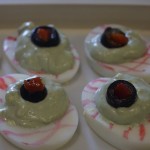 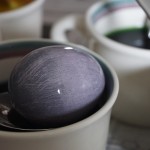 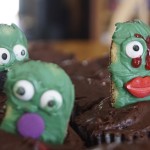 They rise from their chocolaty graves!

Check! It just so happens that Sony put the excellent Deadlight: Director’s Cut on sale for PS4 this weekend, so we gave it a go. It’s an excellent cinematic side-scrolling survival horror game set in, you guessed it, a zombie apocalypse. We ended up completing almost half the game. It’s an excellent game for $15, but at $5 it’s an absolute steal.

Check! This was a another nice, easy year for us. The kids actually spent with us, everything we did was worth spending time on and the weather was gorgeous; despite a few short rain showers. There’s something incredibly comforting about watching a great movie with your family while enjoying a cool breeze.

We hope that you had a great day with those you love and were able to fit in a little fun and games.  We also hope to see you back here in 2018 for the the ninth anniversary of Boiled Eggs and Brain Eaters!