Zombie of the Week: The Sweet Little Zombie Baby Jesus

Posted by kiwidust on December 15, 2015
Posted in: Zombie of the Week. Leave a Comment 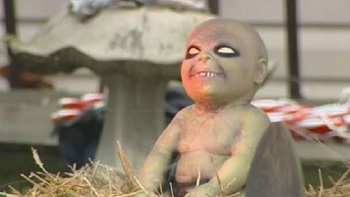 We’ve had baby Zombies of the Week. Twice. We’ve also had no less than three different Jesuses. We never dreamed that we’d be lucky enough, someday, to enjoy a combination of the two! Jasen Dixon has graced us, for the second year in a row, with his amazing interpretation of the Christian Nativity complete with an adorable zombie baby Jesus!

Some of the people in his town, Sycamore Township, Ohio, think that the display is offensive. Happily, like mature adults, they praised the freedom that allows Americans to disagree with one another, yet remain strongly joined in solidarity. They then remembered that there is no right not to be offended and simply avoided the display on Dixon’s private property.

Nah, just kidding! In fact, they tried to lawyer him into taking it down, protested in front of it, refused him permits and started fining him $500 a day.

The entire story was reported earlier in the month by RawStory.com in “Zombie nativity scene draws $500 a day fine from town as Christian protesters descend“. Happily, after removing the roof of the structure he’s in full compliance with zoning regulations, and the fines were stopped after a single day. Dixon will still need to appear in court on the original charge, but for now his display is up and able to be enjoyed by all. If you’d like to support the display, you can do so through Generosity.com or follow its Facebook page.

This is the 141th Zombie of the Week; that’s over two years of zombies! We are desperately running out of ideas! Please contact us with suggestions!