We’ve had more than our share of life lately, so we decided to take it very easy this year. Anything that felt like work, we decided to ignore. It worked out very well. We had a minor setback as the zombie-themed gifts we ordered from Amazon won’t be here until tomorrow. Better late than never, we suppose.

Check!  Here’s the tally. We’ll be doing full reviews of all of these in the coming weeks:

Of course, as a nice bonus, we also enjoyed a great new episode of “The Walking Dead” to top off the evening.

Check! We ate way too much Platter’s Chocolate and, as we did last year, made Crafty Zombie Cupcakes. Dinner was ham, smooshed taters, fried corn and hot rolls. It crushed us completely… for about an hour, then we had chocolate pie. 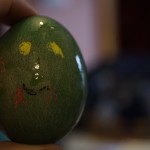 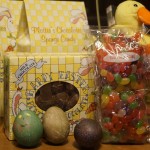 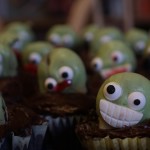 A delicious little horde of the risen dead!

Check! We did some of our favorite, Zombie Dice by Steve Jackson Games, but also spent time with the simple, but addictive Roll For It by Calliope Games. Both of these are simple, portable and easy to play.

Check! This was a nice, easy year for us. The kids spent more time than not with us, but they are teenagers, so did ignore us enough to maintain appearances at least.

We hope that you had a great day with those you love and were able to fit in a little fun and games.  We also hope to see you back here in 2017 for the the eighth anniversary of Boiled Eggs and Brain Eaters!